As I promised with a teaser I'm back with a proper look. This is even more autumn like than it was in my head, but as the weather is pretty nice (or was during the weekend) I don't mind. I'm not that much of an autumn fan as I'm spring's fan, I love this type of an autumn, when you can roam the streets, kicking the piles of colorful leaves on the ground...It's magical isn't it?
You can see a cat tights in this look as well, that's one of my biggest addiction recently or since the holidays at least. I will write about them for sure a bit later, because I couldn't end up just with one pair...rabbits,bears or Tottoro would look as amazing as a cat a thought :D It's possible to divide this photoshoot into two parts. The good and cheerful part and more dark and " Little Red Riding Hood lost in a woods" part :D
We were just changing destinations searching for the best one, but it's the same as autumn isn't it? It's not always a pretty, warm and colorful time. This is rather like the shortest part from it. It's a chilly, rainy and sad time full of melancholia. 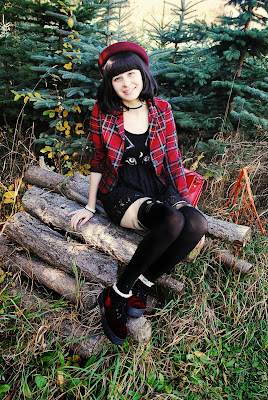 As I'm too contaminated by k-pop, I love the idea of teasers :D
So another one. The complete opposite of what you saw just now.
Something more of a Tenshi from the present.